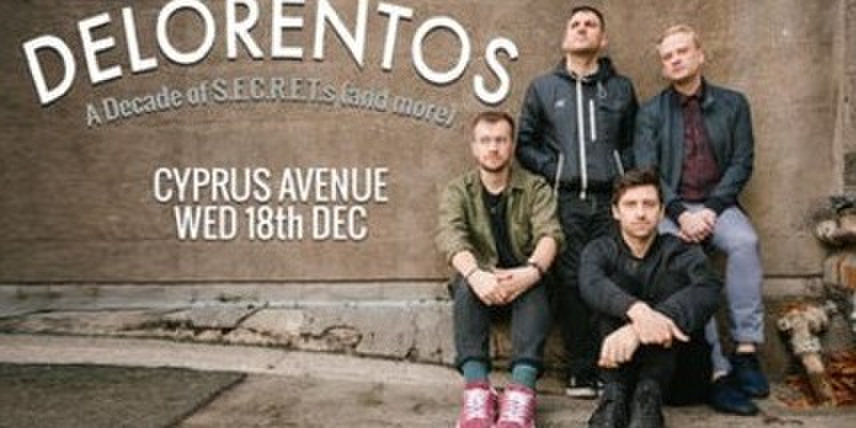 “A Decade of S.E.C.R.E.T.s (and more)”Delorentos will close the decade with four shows in Ireland celebrating the 10th Birthday of their bestlovedcomposition, S.E.C.R.E.T. Spawned in 2009, included on the Dublin combo’s second album,released as a single at the same time and accompanied by a low-budget, perfectly judged video thathelped it become an instant live favourite, a cult radio hit and a much-anticipated regular closing songfor the band’s live shows worldwide.The shows promise an opportunity to grab a first listen to some of the new songs the band have beenworking on in 2019 as well as a chance to check out reworkings of old favourites and some forgottenclassics along the way. And expect some special surprises that hint at the band’s next direction!Delorentos’ determined rise has been a wonderful (and, at times, tortuous) chaos - break-ups, labelscollapsing, reformations and critical awards, worldwide tours and packed houses. Throughout the 4schoolfriends (aided and abetted by a host of unseen others) have strived to better themselves withevery step they take. 5 studio albums (and one acoustic album) have seen them achieve criticalacclaim and 5 consecutive Top 10 Chart Positions in Ireland. 100s of live shows - from Mexico City toMunich, Moscow to Madrid, Memphis to Milan (and all the other letters of the alphabet inbetween) -have seen them thrill audiences the world over with electric and acoustic shows, and they’ve loved(nearly) every minute of it!Film and TV syncs have been regular occurrences and they are currently “the sound of Ireland”courtesy of "Home Again” having been chosen as the theme tune to Tourism Ireland’s globaladvertising campaign. In a world where so much emphasis is placed on “brand new” they continue torevel in writing albums and playing live shows that are ever more passionate, raw and exciting! With 5top 10 studio albums under their collective belt already they’re still champing at the bit and lookingfor the next challenge!