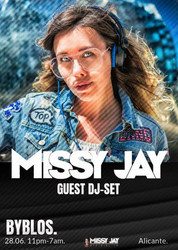 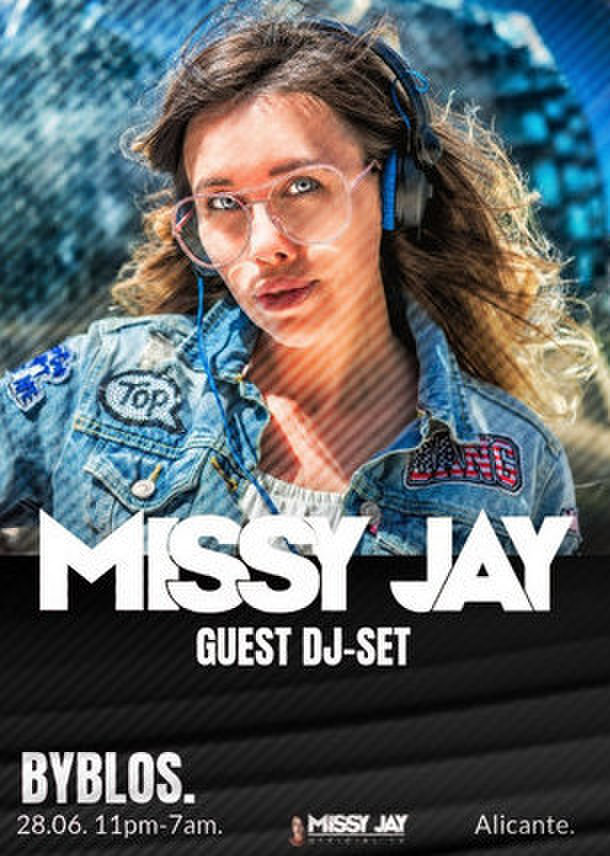 World-renowned DJ Missy Jay will rock the house during a pre-show at Juice in Alicante, Spain and at the Byblos Club, also in Alicante, Spain. Known for her energetic and hard-hitting performances, she infuses all her sets with a positive energy that reaches audiences on multiple levels.

“Byblos, I’ve heard so many good things about you,” said Missy Jay. “I cannot wait to turn you upside down with my tunes! You know how much I love Spain. It’s so musically advanced and has loads of party people - a music heaven for DJs. I’m thrilled!”

The most underground club in Alicante, the Byblos Club’s year-long DJ lineup is inspired by its Ibiza brother, DC10. Highly in demand, she lays down her unique brand of tracks and beats at exclusive venues and events worldwide. She’s appeared at the O2 Arena in London; the Bora Bora Beach Club and Privilege in Ibiza, Spain; and the Café del Mar in Brazil.

She regularly gives interviews for EDM blogs, along with music and lifestyle magazines such as Tillate and the edgy Matrix magazine. Missy Jay also has her Jayland radio show that’s distributed on FM stations in Spain, Japan, Chili, Canada and the U.S.

The international Djane has worked with and collaborated with some of the most famous producers and DJs around the world, and reworked music for iconic singers and performers. Her music regularly ranks highly on Beatport’s Techno Chart. She’s one of the Top 10 Female DJs in the world.

Missy Jay’s upcoming pre-show at Juice and the Byblos Club in Alicante, Spain is an opportunity for those that appreciate the best in beats and tracks to see a master DJ at work. Positive energy pervades all her work, bringing together disparate groups in a spirit of unification.