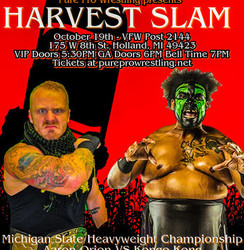 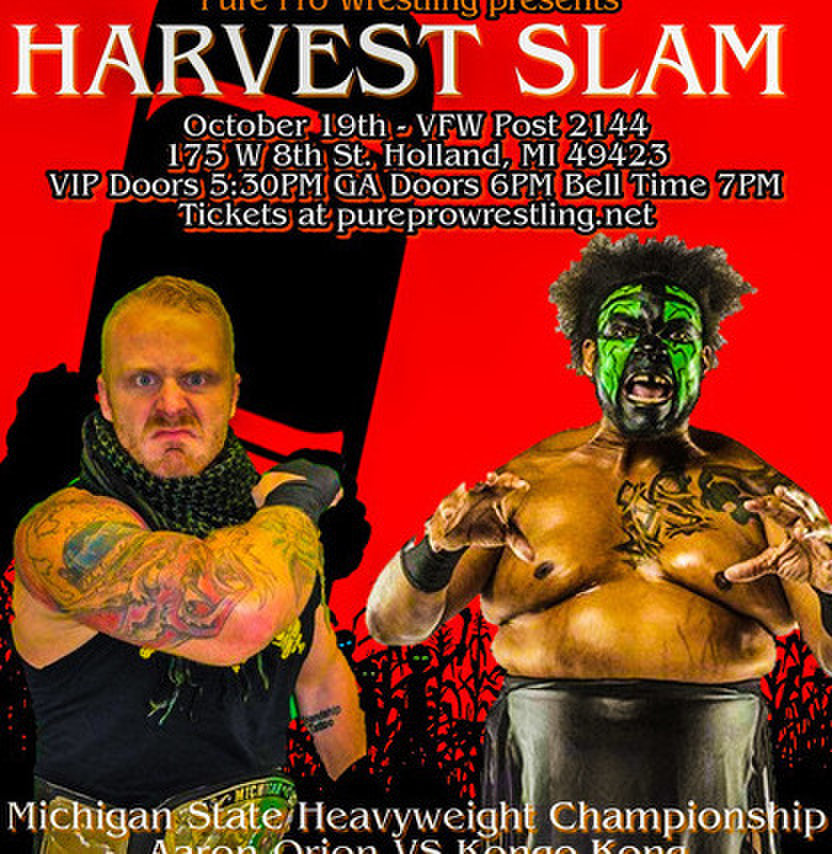 Pro Wrestling returns to Post 2144 in Holland for another action packed night to raise money for veterans!

Pure Pro Wrestling is Michigan's largest & only touring brand of pro wrestling. Don't miss this incredible night of pulse pounding action featuring the Heroes & Villains of the squared circle. The night will feature the top pro wrestlers in the state of Michigan including International star Kongo Kong!

*Two of the hardest hitting men in pro wrestling will go to war for the right to be called the best wrestler in the state of Michigan. The champion, Aaron Orion is a US Army veteran and the leader of the Death Threat Army. Orion currently holds multiple championships in both the United States and Canada and is widely recognized as one of the best independent wrestlers in the world today. He’ll be putting his Michigan’s Heavyweight Title on the line against the 6’4 350 pound wrecking machine known as Kongo Kong. There’s few wrestlers on the planet that can do what Kong does in the ring. Kong is deceptively fast and agile for a big man and his speed and agility combined with his incredible power makes him a good candidate to defeat Orion and claim the right to be called “Best in Michigan.” Kong is a 20 year veteran who’s captured championships all across the world. Kong has competed against and defeated some of the top stars on TV today. Can Aaron Orion’s title reign survive Kong?

Ultra Athletes Battle for the Tag Team Titles: The Destroyers VS DTA

*Michigan State Tag Team Champions Freedom Ramsay & Cobra T.A. will take on Tommy Vendetta & Adam Wick of Death Threat Army in a match that is sure to be worth the price of admission alone! Four of the most athletic wrestlers in the country are about to go to war for the right to be called the best team in Michigan!

Plus: The Nomads, Max Mo