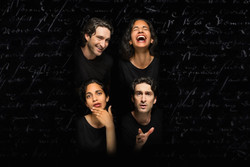 Done/Undone by Kate Besworth is inspired by a complex modern question: how well do Shakespeare's plays stand the test of time - and should some of them not be staged anymore?

This provocative and entertaining response, directed by Arthi Chandra, stars Charlie Gallant (Shakespeare in Love, 2019) and Harveen Sandhu (As You Like It, 2018). They bring multiple characters to life, including two battling scholars, a pair of actors in Hamlet, a theatre-going couple divided over Shakespeare's appeal - and Shakespeare himself!

Done/Undone's central themes could be seen as challenging for a Shakespeare festival. But, says Bard Artistic Director Christopher Gaze, "This production brings an original and thoughtful new perspective to complicated modern questions. We believe its spirit, wit and bravery will resonate with many people and points of view." The production addresses questions of race, sexuality, and which voices are heard and valued - questions that are also acknowledged within Bard's organizational values and its Company Commitments.

Done/Undone is a feature film, shot in multiple spaces at the Shadbolt Centre for the Arts. It premiers August 12 and then will be available on-demand, on a state-of-the-art digital platform, OVERTURE+ (run time: 76 minutes).