What is the best way to immigrate/find a job in Germany ?

I really want to immigrate to Germany. I am an EU citizen, 38, married+2, with an MBA degree and 6 years of experience as an investment adviser (but I'm willing to work in almost every position if necessary).
I also speak very basic German, so I thought Berlin could be a good place to start ( I heard one can do well in English there).
So, what is the best strategy to do the move - Internet job sites ? getting there then try and find something ? I'm clueless.
Please advise,
Thanks 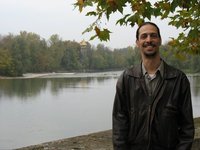