Back to Hungary forum

I am contacting you on behalf of the company Mistral Production in which I am a production assistant.

Currently we are actively seeking candidates to be part of the team of the Americas for the TV show INTERVILLES International.

The shooting will be held in Budapest from 13 to 20 May next .

This program will be broadcast in prime time from the next academic year and split into 13 programs on French television channel Gulli , a youth channel belonging to the Lagardère Group.

The concept of the show is simple: This game has existed since 1998 and proved its worth many times . This is a game based on a huge scale confrontation between 6 countries through a series of physical tests on land, in water and in the air made ​​games of skill treadmill and spin resulting in tumbles and moments of fun.

That’s why we are looking for each shooting 7 mens and 5 womens. There will be 2 shows per day with 2 different teams. We need a captain who must be there from beginning to end. The only condition is to be adult and in good physical condition.

That is why we appeal to you . We would be extremely grateful if you would bring a group of people to make the show as a living rhythm .

Thank you in advance for your attention to my request and beg you to believe in the expression of my sincere greetings. 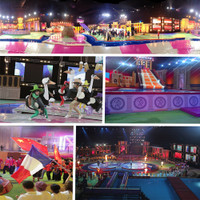