Back to Catalonia forum

I am Thai, of course from Thailand. I had been involved a lot to international people, studied in International college, worked for international airline industry. And here I am, in spain, studying Spanish.....

At the first time when I was here, in spain as a tourist, I felt comfortable, didn't take anything serious about the contact between people here as I counted myself as ' A Foreigner'. I had fun and good time, and love the here culture and language. I like to go out drinking, have fun, and it was very interesting that apparently most of the places I've been I was only Asian person.
AND....... Now I had moved to live in spain, Day by day......... I started to feel strange. And eventually, I found out that People here call me "CHINO". Well, at the beginning, I just laughed at that, and made a joke of it; 'Hey, no soy chino, soy tailandesito... je je je" I didn't have problem whatever they call me, however, I just don't like the way that they started to treat me like "An Alien"!! They just looked at me, and staredt to laughing... and most of the time, when i tried to communicate with them, they just kind of were impolite and looked down on me. English is my second language, and I use it most of the time, with most of people. But when I tried to communicate here with people, they just TRY NOT to understand, and eventually, acted rude to me, which is not very nice at all.... gave me impression that They are kind of "Discriminated" And THAT is toward only "CHINO"(Even I am not Chinese), like me. I heard of some rumors from some of my local friends here that, Yes, most of chinese here, the majority, do not really have communicate or participate with local. However, I do not like, or do not agree the idea of judge me by what I look.... Of course, I have been open minded, however, It is kind of quite sad when I actually saw people treating me that way.... :o(

No offence, This is real experience that I am actually 'suffering'... And that limits of my friendship's boundary.. . . ... It's sad, isn't it?? 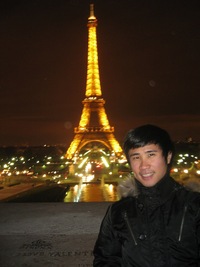