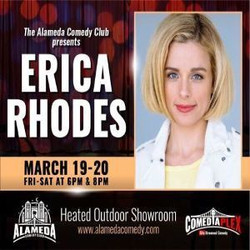 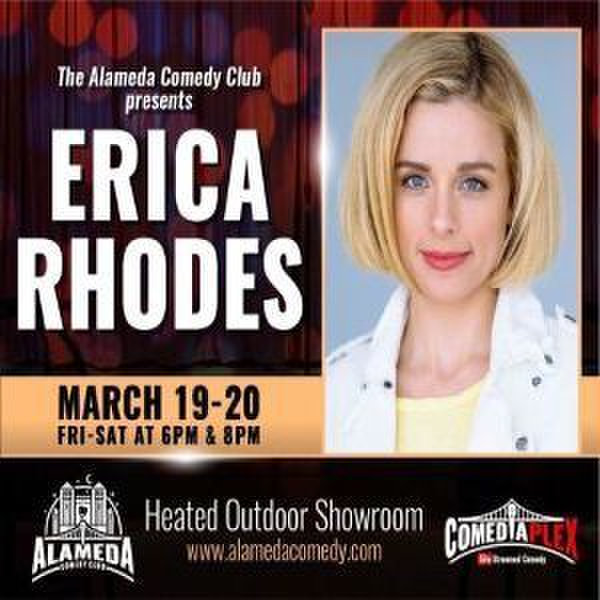 Join us for a great weekend of comedy with the very funny Erica Rhodes.

Erica has appeared on ABC’s Modern Family, HBO’s Veep, Fox’s New Girl, and IFC’s Comedy Bang Bang. She was a regular panelist on Comedy Central’s @midnight and Fox’s Punchline. Her standup TV appearances include the CW’s Howie Mandel Comedy Extravaganza, NBC’s Bring the Funny and Last Call with Carson Daly, SeeSo’s The Guest List, Hulu’s Coming to the Stage, and AXS’ Live at Gotham. She also starred in the ABC Digital series The Off-Season, was a semi-regular performer/writer on NPR’s A Prairie Home Companion, and a recurring character on the Audible series, Dr. Katz: The Audiobook. Her first album Sad Lemon hit #1 on the iTunes comedy charts. Her first one-hour comedy special La Vie en Rhodes was shot as part of the Tribeca Drive-In Fest and will be released in April 2021. Bring the Funny judge Jeff Foxworthy described Erica as “the best-defined comic voice of the competition.”

All seats are sold by the table for two or four guests. Guests must arrive at the gate wearing masks and will be temperature checked. Each table is properly socially distanced and you may remove your masks to eat and drink only. Our staff is double-masked including an N-95 layer and follow strict safety precautions. Stay safe!

We feature a full bar and restaurant with a delicious menu of sharable plates. There is a two-item minimum for all guests.