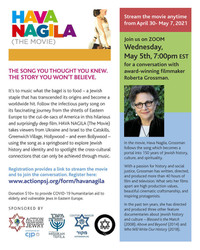 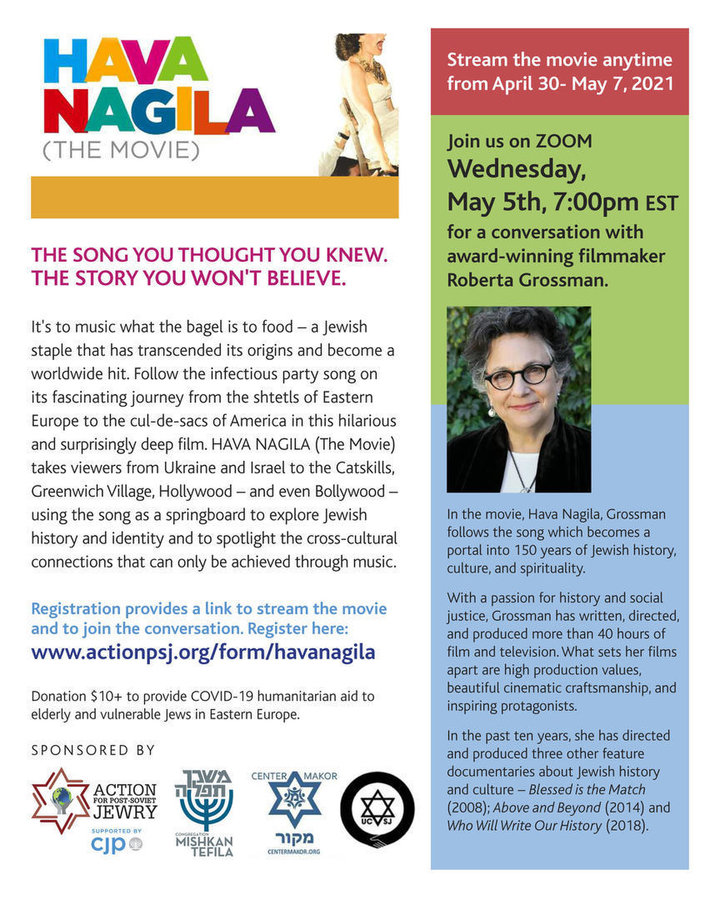 Registration provides a link for you to stream the movie on your own device safely at home with those in your “pod” anytime from Friday, April 30th- Friday May 7th, 2021.

Everyone joins together virtually through the ZOOM link provided on Wednesday, May 5th at 7:00 pm EST for a discussion with Director and producer Roberta Grossman.

Hava Nagila (The Movie) THE SONG YOU THOUGHT YOU KNEW. THE STORY YOU WON'T BELIEVE,
It's to music what the bagel is to food – a Jewish staple that has transcended its origins and become a worldwide hit. Follow the infectious party song on its fascinating journey from the shtetls of Eastern Europe to the cul-de‐sacs of America in this hilarious and surprisingly deep film. HAVA NAGILA (The Movie) takes viewers from Ukraine and Israel to the Catskills, Greenwich Village, Hollywood – and even Bollywood – using the song as a springboard to explore Jewish history and identity and to spotlight the cross-cultural connections that can only be achieved through music.

A conversation with award-winning filmmaker Roberta Grossman. With a passion for history and social justice, she has written, directed, and produced more than 40 hours of film and television. What sets her films apart are high production values, beautiful cinematic craftsmanship, and inspiring protagonists.

In the movie, Hava Nagila, Grossman follows the song which becomes a portal into 150 years of Jewish history, culture, and spirituality.

In the past ten years, she has directed and produced three other feature documentaries about Jewish history and culture – BLESSED IS THE MATCH (2008); ABOVE AND BEYOND (2014) and WHO WILL WRITE OUR HISTORY (2018).