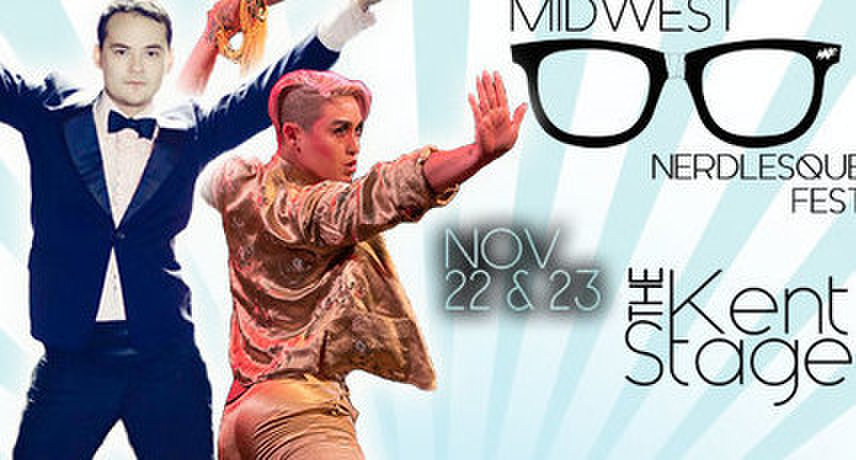 The Second Annual Midwest Nerdlesque Festival Welcomes a Cast of Performers from Around the Country on November 22 and 23!

The Midwest Nerdlesque Festival returns for its second year, welcoming a cast of over sixty-five performers from across the country for two nights of naughty nerd-ery.

This year’s Midwest Nerdlesque Festival will be held at the Kent Stage on Friday, November 22 and Saturday, November 23, 2019 and will be headlined by Bazuka Joe (the sweet and charming member of the award-winning Stage Door Johnnies from Chicago, IL) and Babia Majora (co-producer and host of F*ck Shit Up; Toronto’s monthly trans and non-binary cabaret at the Gladstone hotel). The Midwest Nerdlesque Festival also welcomes featured performers Spikey Van Dykey (You've seen him on stages all over the country, on Elle Magazine's About Face, Buzzfeed, The Huffington Post, Rebel Circus, and Transfashionable), Verna Vendetta (a gender-bending burlesque performer and drag king) and Delhi Marquette (co-founder of Moonstruck Burlesque in Athens, OH).

Nerdlesque began in the late 1980s with living burlesque legend, Pillow, and combines burlesque, drag, and variety performance with all things nerdy—pop culture, movies, TV shows, comic books, video games, or whatever makes a performer “geek out.” Expect to see performances drawing inspiration from Harry Potter, Speed Racer, the Marvel Universe, Greek mythology, Buffy the Vampire Slayer, I Love Lucy, Star Wars, Disney, and so much more. Nerdlesque is designed for mature audiences, so fans ages eighteen and up are invited to join in the fun!

Shows on both nights are at 8:00 p.m. and tickets are available through the Kent Stage box office at thekentstage.com. A variety of ticket options are available ranging from $20-$40. More information about the event is available at midwestnerdlesque.com.