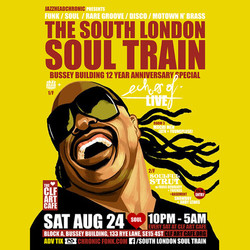 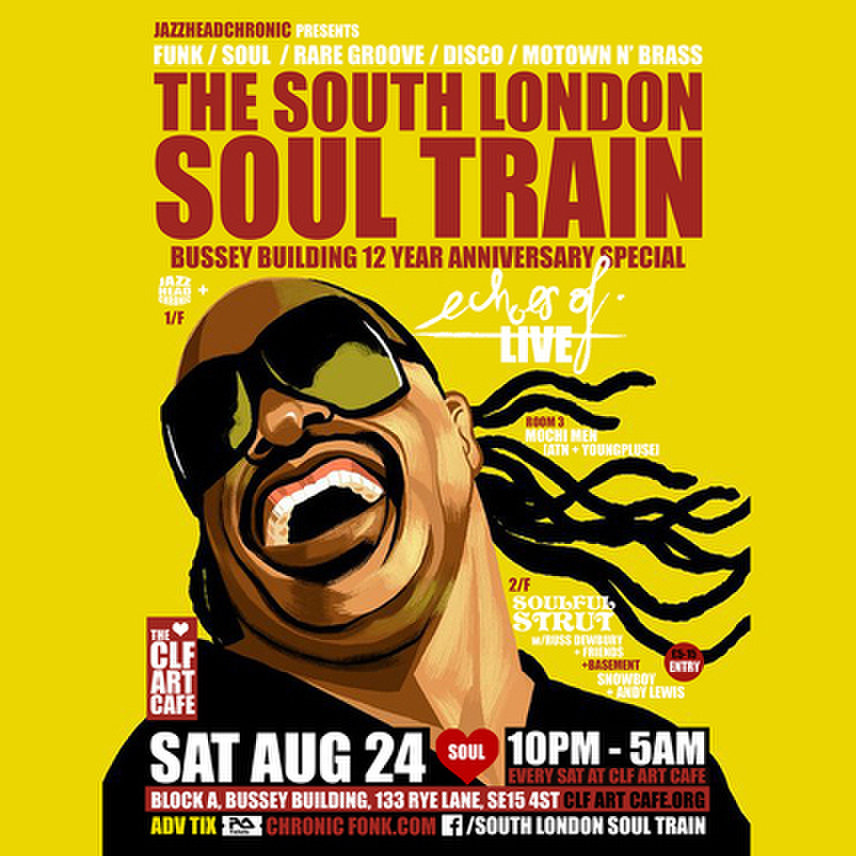 The South London Soul Train is in full on celebratory mode as we celebrate The Bussey Buildings 12 Year Anniversary with a full on 7 hour, 3 floor, 4 room epic at the CLF Art Cafe. Get down X

THE SLST CELEBRATES 12 YEARS OF THE BUSSEY! Sat Aug 24 - The South London Soul Train is in full on celebratory mode as we celebrate The Bussey Buildings 12 Year Anniversary with a full on 7 hour, 3 floor, 4 room epic to make you dance well harder y'all at The CLF Art Cafe.

ECHOES OF … For 3 years now, the french funk band "ECHOES OF" has been leading a very successful and phenomenal monthly paris residency called "Funk & The City", The young cats of ECHOES OF paying tribute to the american cities of funk (songs between 1975 and 1985) in a very unique, original and ambitious way, covering and reviving songs not often performed live. This band have gotta be seen to truly be believed folks.

Then on LEVEL 2 - We are psyched to welcome back one of the most influential figures in UK Club culture, as we welcome righteous eclectic audio slinger, Brighton Jazz Bop Head RUSS DEWBURY and FRIENDS. RD bringing the Nu Yorican Funk / Disco / Afro Latin / Jazz Juke Beats / Percussive Soulful sounds of his super dope Brighton party SOULFUL STRUT to the SLST.

The SLST 3 Floor / 4 Room line up completed in The RYE WAX / BASEMENT. Legendary DJ SNOWBOY + IAN WRIGHT dropping more of the platters that always will matter. The finest selections in soul