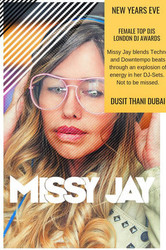 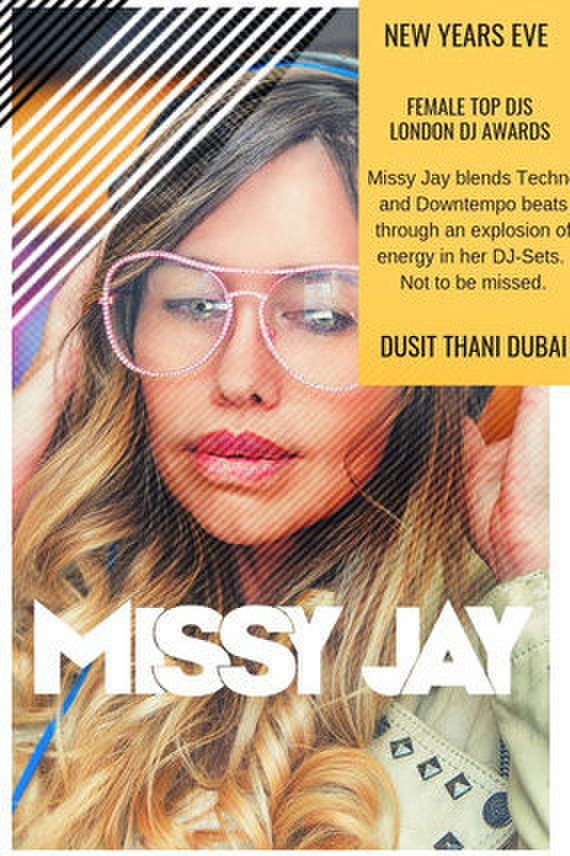 DJ Missy Jay has been courted by venues around the world. To ring in the New Year, she’ll be laying down her unique brand of tracks and beats on New Year’s Eve at the Dusit Thani Hotel in Dubai, UAE.

To ring in the New Year, Missy Jay will be laying down her unique brand of tracks and beats on New Year’s Eve at the Dusit Thani Hotel in Dubai, UAE.

“I’m very excited and looking forward to be playing again in magical Dubai, especially in a spectacular location as the Dusit Thani Hotel,” said Missy Jay. “I will also take some time off there, visiting the desert and riding camels! I literally cannot wait. I’ve been working really hard lately on the radio show and world tour, so this will be a very nice closing of the year.”

The five-star venue offers an ideal showcase for Missy Jay’s extensive talents and a luxury setting for celebrants to revel in style. The Dusit Thani Hotel group is known around the world for its hospitality, iconic experiences, and sophisticated grandeur.

Every Missy Jay performance is filled with positive energy and she connects with audiences on a visceral level. One of the most highly sought DJs in the business, her dynamic performances include sampling live, scratching, remixes, mashups, and on-the-fly improvisations with 4CDJ desks that have earned her some of the most coveted awards in the DJ industry. She received “Best Italian Female DJ” award and also won “Best European Female DJ”. She’s ranked as one of the Top 10 female DJs in the world.
In addition to a schedule that keeps her busy throughout the year DJing around the world, the artist also launched her own JayLand Radio show. The program is broadcast on FM stations around the globe and recently aired its 50th episode.

Missy Jay is available for a wide range of international luxury events. Those that would like to have Missy Jay at their celebration can contact Vanessa Clark at Female Top DJs Agency in London.