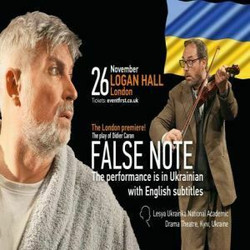 The performance is in Ukrainian with English subtitles.

Lesya Ukrainka National Academic Drama Theatre (Kyiv, Ukraine), which despite the war, continues to work to support the audience in Ukraine and unite it beyond the country's borders, invites the London audience to see Didier Caron's exquisite and at the same time shocking drama "False Note". The play was performed with great success in Ukraine and abroad.

It is a unique opportunity for the British public to discover Ukrainian theatre, European and distinctive at the same time.

We would like to remind you that Lesya Ukrainka Theatre came to the British capital in 2015 with four productions based on Ukrainian and European classical drama. All four plays received high praise from London critics and rave reviews from the audience.

The colossal support the United Kingdom has shown to the people of Ukraine has elevated the relationship between the two countries to a whole new level. Our political and economic partnership has evolved into a sincere friendship based on endless gratitude. Not only politicians, but every UK citizen who offers shelter, help or even a word of solidarity are bringing closer the triumph of justice over cruelty and lawlessness.

We hope that humanitarian values will become the basis for the world order without war.

Culture is the pioneer when it comes to building understanding and dialog. Building new bridges is the goal for the upcoming tour of Lesya Ukrainka National Academic Theater.

​The theater with almost a century long history represents the classic culture and repertoire of true psychological drama.