Made In Leeds Festival 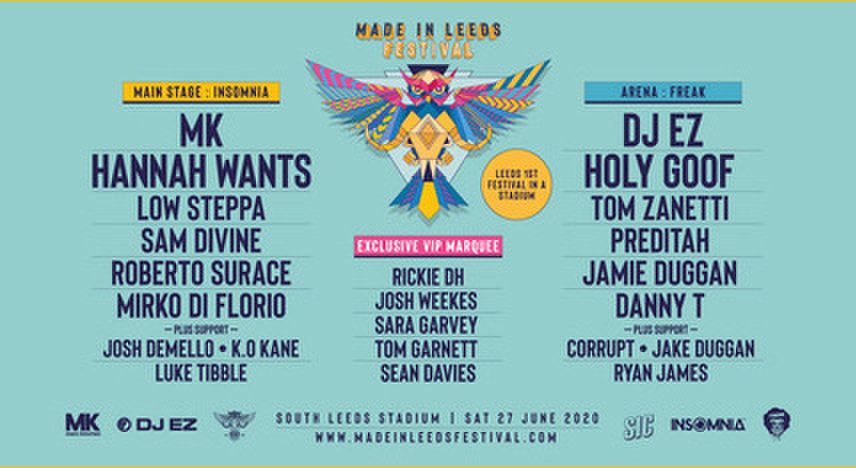 MADE IN LEEDS FESTIVAL 2020

Following on from the announcement that Made in Leeds will be heading to the 10,000 capacity South Leeds Stadium for their 7th edition on Saturday 27th June, organisers have now unveiled their 2020 line up which features a host of world renowned headline acts for the first time ever across 3 mega arena’s and it’s huge!

The main stage, where fans will witness a huge main stage production hosted by Insomnia, will feature some of the biggest house acts on the planet right now, Headed up by revered DJ, Producer & Remixer MK who is responsible for creating some of the defining sounds and biggest tracks of early house & smashing the UK top 10 charts in recent years with his singles such as ‘17’, ‘Back & Forth’,”Piece of Me’.

MK will be joined by none other than Hannah Wants who is without a doubt one of the brightest stars on the electronic music scene, alongside her Brummie counterpart Low Steppa, House Music’s leading lady Sam Divine, Roberto Surace, Mirko Di Florio and Leeds’ very own Josh Demello, K.O.Kane & LUke Tibble.

Expect Bass driven beats as the one and only DJ EZ will be heading up the second of Made In Leeds’ mega arenas and as one of the most prolific English DJ’s on the scene right now, he is known for his garage sound and powerhouse sets that are a firm favourite with festival goers. Genre mash up artist and Fabric mix veteran Holy Goof will join DJ EZ alongside dance music’s Darlin’: Tom Zanetti. Preditah, Jamie Duggan, Danny T, plus support from Corrupt, Jake Duggan and Ryan James.