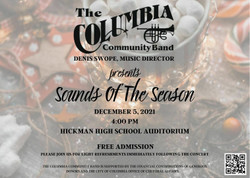 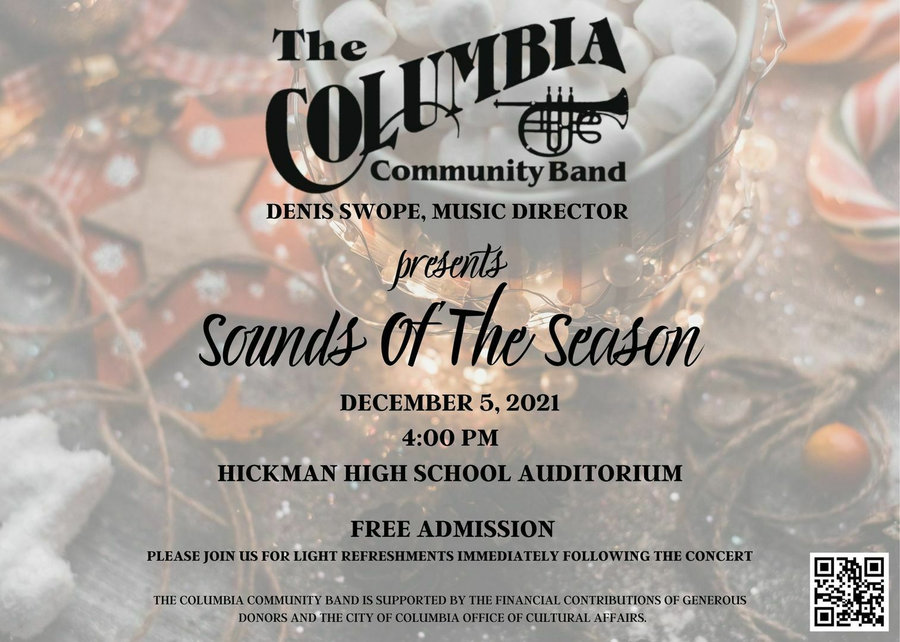 Join the Columbia Community band for the annual Sounds of the Season concert. This free event is sure to help you ring in 2022 on a good note!

The Columbia Community Band was founded in 1981 as part of the Columbia Public Schools Adult Education Program. It is comprised of a group of dedicated volunteer musicians. Since its inception, CCB has become one of the Midwest's premier symphonic concert bands, and has grown from an initial membership of approximately twenty, to seventy musicians today.

The Columbia Community band's first conductor, Butch Antal, was trumpeter with the Henry Mancini Orchestra and other professional bands. Mr. Antal established and guided CCB through its first six years. Mr. Alan Nellis lead the band from 1986 to 1988, followed by Professor Keith House, who served as music director from 1989 to 2005. Mr. John Patterson succeeded Keith House as director in 2005. Mr. Patterson had served The Columbia Community Band since 1998 as a band member, becoming assistant director in 1999. In 2006, Mr. Patterson was instrumental in leading CCB through its 25th anniversary celebration. He served as director until 2018 before handing over the reins to Mr. Paul Copenhaver. Mr. Copenhaver, having joined the band in 2008 as a trumpeter and assistant director, served as director for just the 2 short years leading up to his untimely death in February of 2020. Mr. Phil Wood, serving as assistant director, was instrumental in helping CCB fulfill commitments during the final months of 2019.