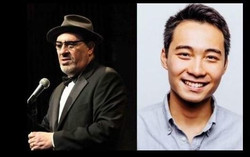 Join us for Eindhoven English Comedy Night at the Hub on Wed, Feb 20 with professional stand-up comedians coming to entertain you.

﻿Your host is Host MC Joe Eagan (CAN).

Check out our promo clip to see what the comedy nights are like!
https://www.youtube.com/watch?v=BSgE4ZjZNWs&t=1s

Where: The Hub, Vestdijk 25, Eindhoven

Buy advance and earlybird via:
https://billetto.nl/en/e/online-tickets-wed-feb-20-eindhoven-english-comedy-night-at-the-hub-tickets-335978

Group of 4 or more? email hub@internationalcomedians.com for a nice group rate, please state in your email if you are Hub members or not.

Headline Bio:
Sol Bernstein (UK/ISL) - Sol has performed 2 solo show's. "ALMOST ALIVE" at the Edinburgh Fringe Festival 2003 winning a "Spirit of the Fringe award", and "ALMOST ALIVE 11" in 2004. " One part Alf Garnett, two parts Mel Brooks, and three parts like nothing you've ever heard" The Guardian. "An instantly winning creation" Evening Standard. "No age barrier to comic genius" Edinburgh Evening News. "Bernstein's the real deal, you'd better believe it" The Scotsman. ﻿He's performed all over the world at venues including The London Palladium, New York's Carnegie Hall, The Paris Olympia, Caesars Palace Las Vegas, and Scunthorpe Baths, but it's at night clubs where Sol really comes to life. His charisma, his style, his catch phrase "why don't you put on a tie" his chutzpah, put it all together and you see the magic that is Sol Bernstein.