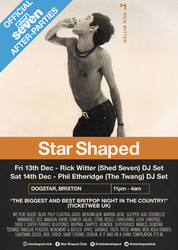 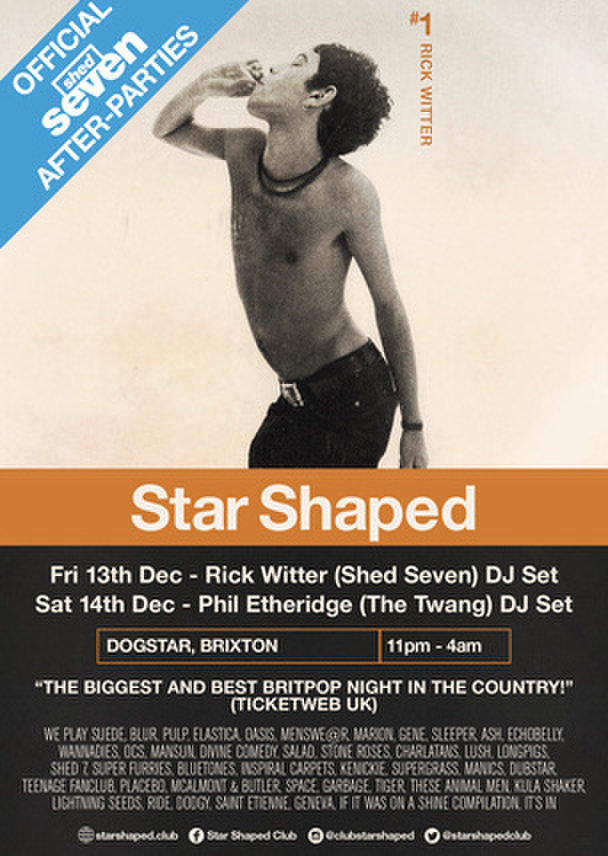 The Official Shed Seven Aftershow Party where the legendary club night Star Shaped will be joined on the decks for one of Rick Witter's brilliant sets! Straight after Shed Seven finish rocking Brixton Academy, Rick will be hot-footing it over to Dogstar to join us all and party the night away!

THIS IS NOT TO BE MISSED!! An indie disco beyond compare. Make the most of Shedecember and make this your BIG Xmas night out!

Tickets are extremely limited as the room in Dogstar is a low capacity making this an exclusive after show party which WILL be a sell-out so you'll need to grab a ticket very quickly if you want to join the party!

The Home of Britpop. The people behind Star Shaped Festival. The spearhead behind the revival.

Remember when Indie clubs were good? When the charts were filled with great bands? Remember when your weekly reading was the NME and Melody Maker? And the highlight of your month was the release dates of Select and Vox magazine? We do. Star Shaped is the biggest and the best Britpop night in the country and widely known to artists and fans of the era as ‘The Home of Britpop’.

Grab your tickets, get your Adidas Gazelles/Samba and/or glittery eyeliner on, and come and party with Damon, Liam, Jarvis, Justine, Brett and co…Tonight we’re gonna party like it’s 1995!

TicketWeb UK: "Star Shaped is the biggest and best Britpop night in the country!"

Uncut Magazine: “A time capsule where the 90s still exist and thrive. Glorious.”