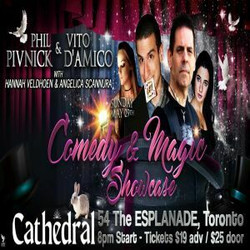 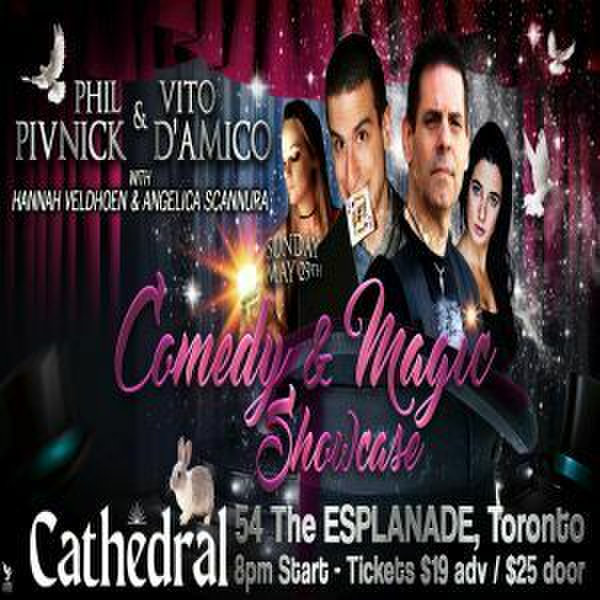 One night only at the legendary Bar Cathedral! Come join us for an evening of comedy and incredible magical illusions. We have three Toronto professional comedians for you, followed by magicians Phil Pivnick and Vito D'Amico.

You will laugh, cheer, and be utterly amazed wondering how it was all done. Tickets are only $19 in advance and $25 at the door (if available).

Your featured performers are:

Vito D'Amico: Vito is an award winning comedian and magician, and was named London's funniest person 3 times. He's worked with Tom Green, Mike Bullard, and David Letterman, and has a long and extensive resume in showbiz. His style of comedy magic will have you laughing and mystified at the same time!

Phil Pivnick: One of the premier performers in Toronto, Phil is not just a magician, he's an entertainer. His shows contain laughs, amazement, and mind boggling illusions. He's delighted audiences across Canada, and now we're bringing him to you! His weekly magic show is one of the hottest tickets in magic in Toronto, so this is one you won't want to miss.

Anjelica Scannura: Recently selected to be a featured performer in this year's Winnipeg Comedy Festival, she's definitely one of Toronto's comedian stars. She was a finalist in Toronto Comedy Brawl 2019, and the winner of the 'I Heart Jokes Awards' 2018 Newcomer comic. As an actor, you've seen her in Disney's Camp Rock, Disney's Overruled, CTV's Satisfaction, APTN's Renegade Press, TIFF's Manson My Name is Evil, and CBC's Frankie Drake Mysteries.

Hannah Veldhoen: One of the fastest rising Toronton comic, Hannah has been absolutely lighting up sold out shows across the GTA and is one of the most sought after female performers. Her darkly energetic style focuses mainly on dating, past regrets and surviving her Oshawa upbringing.