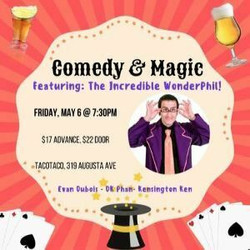 Come and join us for one night and one show only, a hilarious evening of comedy and magic featuring the one and only WonderPhil! You'll laugh, you'll cheer, and you'll be utterly confused in awe wondering how it was done.

We have 3 professional comedians for you, and 2 magicians. Of course, the headliner of the show is none other than WonderPhil, one of Toronto's premier magicians. You've probably seen him around and on big shows, and we're very fortunate to have him on our stage!

Tickets are just $17 in advance, and $22 at the door. We are able to keep tickets priced lower due to the support of TacoTaco for local performers.

Your featured performers are:

WonderPhil: One of the premier performers in Toronto, WonderPhil is not just a magician, he's an entertainer. His shows contain laughs, amazement, and mind boggling illusions. He's delighted audiences across Canada, and now we're bringing him to you on the TacoTaco Main Stage! His weekly magic show is one of the hottest tickets in magic in Toronto, so this is one you won't want to miss.

DK Phan: Since getting his start in 2010 at the Second City Training Centre where he studied stand-up, improv comedy, and acting – he has performed across North America including Toronto, Montreal, Vancouver, New York, and LA. His relatable and down to earth style of comedy has earned him time on Rogers TV, Absolute Comedy, Yuk Yuks, and the Just For Laughs festival.

Evan Dubois: Evan considers himself a witty ginger with a guitar. He's been featured many times at Yuk Yuks, and runs his own comedy show "The Banana Room". With his mix of stories, observations and songs, there is always something for everyone!