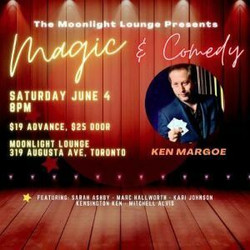 Come join us for an evening of laughter and amazing magic! We have professional Toronto comedians to entertain you, and our headliner magician Ken Margoe from the Illusionarium magic spectacle this past year.

We keep bringing him back because tickets always sell like hot cakes! Come see what all the hype is about.

It's just $19 in advance, and $25 at the door. We are expecting to sell out of tickets, so get yours while you can. If you missed the Illusionarium show last year, here's your chance to see one of their main magicians for a fraction of the price!

Ken Margoe: This guy catches bullets for a living! Ken was the headliner in the VIP room at Illusionarium, and holds the record for the most dangerous magic trick: 26 bullet catches in one day. He has performed for the New York Knicks, Woody Harrelson, 50cent,The Rolling Stones, Much Music, City TV, and many more. This is not a show that you want to miss.

Marc Hallworth: Originally from Calgary, Marc has performed all over Canada and is one of the most decorated comics on our roster. He has performed at NXNE, YYComedy, FunnyFest, the Brantford Comedy Festival, "Funniest Clean Comedian on the Lakeshore", and the Bollywood Monster Mashup, where he opened for Aparna Nancherla. We don't have enough space here to list all of his accomplishments and awards, so you're just going to have to come and see for yourself!

Sarah Ashby: Sarah brings her angelic voice, and mixes it with her blend of dry humor and sass. The result? A musical comedy act that you won't soon forget! This Roast Battle Champion has been performing all around Southern Ontario and has appeared in multiple festivals including JFL 42, the Bi- Arts Fest, the Brantford Comedy Festival, and the 420 Comedy Festival.