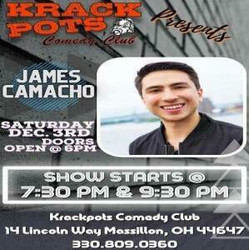 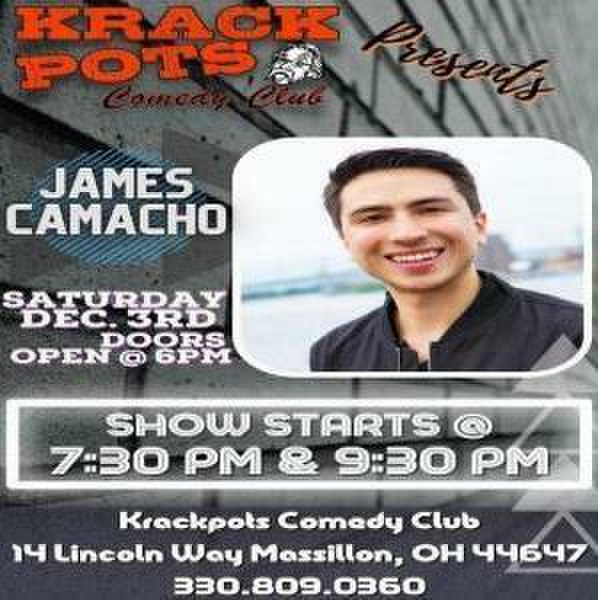 Krackpots Comedy Club conveniently located at 14 Lincoln Way W. Massillon, Oh 44647 announces an evening of comedy with James Comacho
We strongly encourage you purchase your tickets in advance because this is certain to be a sell out performance. Tickets are available on a first serve basis. Tickets are general admission with a limited number of FRONT ROW SEATING with VIP/MEET and GREET .
HEADLINER , James Camacho is a NYC based comedian via NJ. James is an only child that grew up with a Chinese mom and Puerto Rican dad. He has a great uniqueness, likability, and boyish charm that make him one of the most hilarious and polished young comedians out there!
James just taped an episode of FBI on CBS, and also a comedy set for HBO MAX as part of the Ha Comedy Festival. He has appeared on Kevin Hart's LOL Network. He has been seen on "Kevin Can Wait" on CBS, "A Crime to Remember" on the ID channel, and on commercials for Parker Waichman, Dunkin Donuts, ESPN, and Vice. He just filmed a role in the upcoming movie, "God the Worm" with Willie Garson and Annabelle Sciorra, and was in the movie, "What Happened Last Night" with Amber Rose, and the movie, "The Golden Phoenix. He also appeared in Jay-Z's music video for "I Got the Keys" with DJ Khaled, and in a viral video for Cosmopolitan.com. He has a podcast centered around high school called, "I'm Just A Kid!". His home club is The Comic Strip Live in NYC, where Jerry Seinfeld and Adam Sandler shot their Netflix specials.
In a time of political turmoil and social unrest James' point of view and comedic telling's of his mixed heritage, and personal and dating life is enjoyable and relaxing for everyone. Follow him @CAMACHBRO Instagram for funny videos and Twitter for daily jokes!