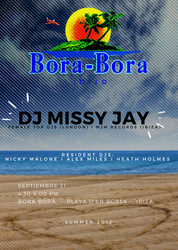 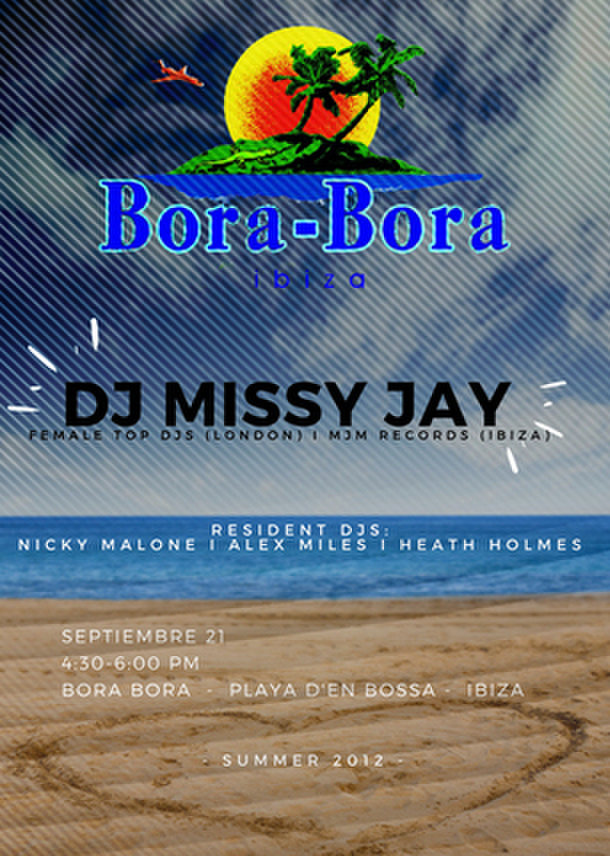 Ibiza, Spain - Bora Bora is well-known for its party atmosphere where the young and fashionable of the world dance the night away to electronic music from the best DJs in the business.

“Oh, Bora Bora! You were the first place I danced the first time I flew to Ibiza, along with Pacha,” said Missy Jay. “I have a special memory of Bora Bora. Now, I’ll be conducting the music there. I’m so happy! I have been invited to perform for one of their closing parties - such an important date! Thank you Alex & Nicky.

Missy Jay will be in her element during the performance at the Bora Bora Club in Ibiza where sun, fun and music come together in one of the most uniquely blended dance and party environments in the world. The club’s clientele are treated to music by DJs of international renown. Missy Jay is no stranger to the international scene and is a regular at luxury Ibiza parties where’s she consistently invited back by popular demand. Being invited to play by Nicky Malone and a DJ of Alex Miles’ stature is a testament to Missy Jay’s experience, skill and ability to get a party started as one of the top DJs in the world.

Missy Jay was the celebrity DJ headliner at the exclusive Pacha Hotel’s Elegant Sessions in Ibiza and has an eclectic international schedule that includes a performance at Privilege during a Face of Ibiza event on Aug 11.

The charismatic DJ is a perennial favorite due to her signature on-the-spot remixing abilities that she combines with cuts, loops, track marks and spinbacks. She won the Matrix Female DJ Contest in Italy and the DJette World Cup in France for her track mixing techniques, placing her among a select few worldwide.

About Missy Jay
Missy Jay’s “Nobody’s Perfect” track reached No. 5 on the Beatport Techno Chart and the award-winning Dubfire played her track during Cocoon parties in Amnesia. Her international schedule includes appearances in Dubai, Doha,