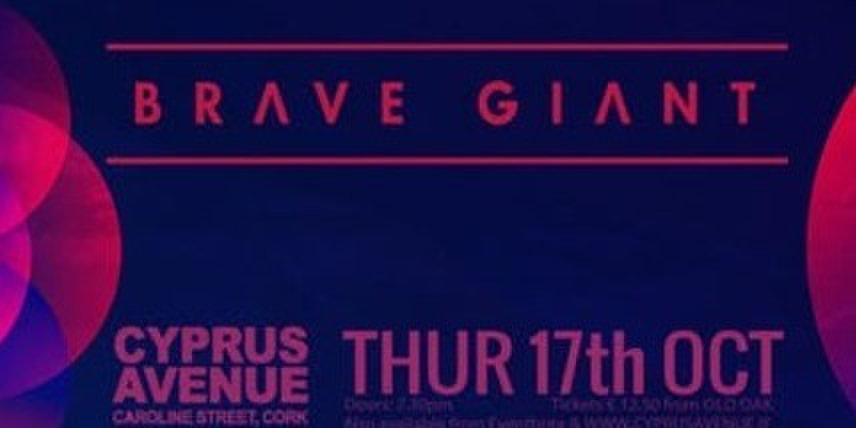 ‘Decorate Your Mind’, the first single from Brave Giant’s debut album is now on release and stormed into the chart day of release and sees a slightly new direction for the band. “It’s a powerhouse of a track, as anthemic and propulsive as it is dark and atmospheric.” (Hot Press)
We are now delighted to present the accompanying video.  Directed by Eva Wyse with beautiful performances by Fionntáin Larney and Owen Roe, is one of Ireland’s foremost film, TV and theatre actors.  “The video portrays the heart-rending tensions and disputes that characterise Irish family life. It follows the arc of a father &amp; son relationship.”
In just three years, Brave Giant has gone from selling out two nights Upstairs at Whelans in Dublin to the band’s biggest headline show to date at The Olympia Theatre, Dublin on Saturday November 9th, being on the cusp of selling out almost five months out from show day.  An additional allocation of tickets has been released this week and now on sale via ticketmaster.ie
Emmett Collum (percussion), Mark Prunty (bass, guitar/vocals), Podge Gill (guitar/vocals), Ross McNerney (banjo/mandolin/keys), are Brave Giant.  A band rooted in an inherited love for trad &amp; folk, moulded, morphed and inspired by indie &amp; alternative influences.
Highlights from 2018 include sharing a stage with Hozier, Walking on Cars and other highly-respected Irish artists at the 2FM Christmas Ball at the 3Arena in December, a further No 1 single here at home with Somebody’s Someone, two sold-out headline shows at The Button Factory Dublin and opening band’s live record in London with three sell-out headline shows.
Since releasing its first commercial track in 2016 (‘Lordy Lordy’), Brave Giant has sold-out numerous shows in Dublin and across the country and had a string of top 5 singles including The Time I Met The Devil and two number one’s with Way To Love and Somebody’s Someone.  Not shy to festival season either, in the three years to date some of the band’